GARY JUBELIN had never really thought about being a policeman. It all happened in a ‘light bulb’ moment, when as a slightly directionless 22-year-old working on a building site, he saw police “chasing a bad guy through Ryde” and thought that looked like something he wouldn't mind doing.

He signed up the next day.

Thirty years later, he’s still “chasing bad guys” and still passionate about getting justice for the victims of crime.

Born in Paddington, Gary grew up in Epping with two sisters and a brother, and supportive parents, who were somewhat bemused at his choice of profession.

“I found that crooks and that side of life interested me,” Gary said.

“Their strength of character, their spirit - I love being in the interview room.

“And there was certainly the excitement of the job - being paid to chase someone and tackle them!”

He chuckles as he recalls having to learn how to type ... on a manual typewriter, which he took on holidays so he could practice to get his speed up.

From early in his career he had his eye on being a detective.

“You’d go to major crimes and set up the tape and then the detectives would come in ... they were the ‘heavies’ and clearly working at the sharp end of things,” he said.

“But you had to be tapped on the shoulder for that, so I just kept my head down and worked hard.”

When the invitation came, Gary never looked back.

“Homicide is the pinnacle for me – it’s my passion,” he said.

“I treat the victims of crime as if they are members of my own family ... I take it personally and I always give 100 per cent. I can't cop mediocrity from anyone.

“These are the things I say to the young detectives who I work with and train. I want them to understand how hard you have to work and I want them to challenge me. I don't mind mistakes through effort but I don't like lazy police.”

Gary’s respect for those he helps is legendary, especially on the Mid North Coast, where he has been supporting the families of the three murdered Bowraville children (16-year-old Colleen Walker, four-year-old Evelyn Greenup and 16-year-old Clinton Speedy-Duroux) since he first walked onto the case in 1997.

“I had a young family myself at the time and was considering getting out of homicide but I was sent up there and spent the next 18 months working intensively on the case,” he said.

“I thought I understood Aboriginal people but going there showed me a whole new world ... I don't like injustice. I couldn't believe the way the families had been treated and was shocked but understood the resentment the families had for the police.”

After close to 20 years, he is still ‘walking’ with those families in their continuing battle for justice, and counts the love and respect shown to him by them and other victims’ families as a consistent high point of his career.

“I'm just doing my job and it is very humbling and personally rewarding to feel that connection - it helps drive me to fight hard for the victims,” Gary said.

The work does however come with many lows.

“Working homicide cases as long as I have exposes you to a lot of sadness, especially when speaking to people who have just had someone they love murdered,” he said.

He cites a particular low point as the 2006 acquittal of a person for the murder of four-year-old Evelyn Greenup. It was the second acquittal of this person and a huge blow to the families.

“There was so much sadness and grief in the court but the families were so dignified,” he said.

“Personally I felt like I had let them down after they had suffered so much ... it took a long time to get over that.”

Currently the fact that he and his team have not yet found out what happened to young William Tyrrell (the toddler who disappeared from Kendall nearly 18 months ago) is weighing heavily.

So how does Gary find some peace of mind in all this chaos and violence? How does his family cope?

Martial arts, qigong, meditation, a lot of yoga plus boxing are all in the mix, as are surfing and riding motor bikes.

“I'm into the yin yang of things ... meditation and qigong help give me perspective so I can check myself when things are getting stressful,” he said.

“I throw myself into my work but I always make time for my fitness and meditation – it’s how I balance myself.”

Holidays are a chance to explore completely different worlds - Vietnam, Thailand, the Maldives … and in 2013 a meditation retreat in Nepal showed him what real internal peace could be.

“We sat there for two days, which was hard for someone like me - I never realised how peaceful I could become.”

Gary’s personal life is no secret - it was writ large on the small screen in 2012 when the fifth season of Underbelly, Underbelly Badness, aired on Channel 9.

The series depicted the criminal activities of Australian kidnapper, murderer and drug-dealer Anthony Perish’s (aka ‘Rooster’) criminal activities around the Sydney suburb of Lindfield and adjacent areas, and followed the NSW Police ‘Strike Force Tuno’, who finally apprehended him after almost a decade of intensive surveillance and informant information.

Gary led that team and his perseverance for all those years played no small part in the eventual success of the operation to convict five people for the abduction and murder of Terry Falconer.

“I count it as a particular career high for myself and my team because we were consistently told we would not be able to solve it,” Gary said.

The story is also documented in the book Bad by Michael Duffy, which is a “meticulous chronicle of an extraordinary police investigation into an Australian criminal empire that dwarfs all others”.

Bringing all that to life on TV meant being followed around by writers for two years, and opening himself and his family to the world.

It also raised some tricky politics within the police force, where, in what can only be called ‘true Australian fashion’, tall poppies are not popular.

Gary laughs as he recalls initial discussions with screenwriters desperate to flesh out his character to add to the dramatic tension of the program.

“I told them I was divorced and had two children ... that I'd had a long term relationship with a fellow senior detective ... and at the time was in a relationship with an Aboriginal clinical psychologist from Perth, who I'd met on a murder trial,” he said.

“They couldn't have been more pleased!”

Pleased too were his two children: “They were teenagers at the time and it really gave me some street ‘cred’ with them.

“I felt happy with the series because it showed the effort police put into investigations, but it was also confronting seeing my life played out on screen.”

He talks of his children, a son and a daughter, now 23 and 21 respectively, with pride.

“I separated from their mother when they were six and eight-years-old but I always tried to be there for them as much as possible ... I lived down the road so there was never a question of how to share them but with this job, you get a phone call and you can be gone for a week,” Gary said.

“There were a couple of times I was driving down the highway heading to a homicide looking for a place to leave the kids.”

‘Being there’ also included occasionally driving from Sydney to the Central Coast just to pick his daughter up from ballet for the 10-minute ride home, or coaching his son’s soccer team - including for a season when his son had broken his leg and remained at home on the couch.

“The kids certainly think I have an interesting life – they’ve overheard phone conversations about murders or with informants ... it was not your usual upbringing,” Gary said.

Both children have since headed to university and Gary is happy with the relationship he has with them.

Gary admits he can’t imagine living a ‘normal life’, although there are times when a quieter existence looks attractive.

“I actually really like the pressure and I’d die of boredom doing anything else,” he said.

“I've had such a varied career. Police work has opened so many doors for me – I worked in London on the Gordon Wood matter (Wood was convicted of the murder of model Caroline Byrne; the conviction was later overturned), I've been in Hong Kong, Shanghai, Beirut, Canada, Fiji, New Zealand and Paris as a result of my career.

“I’ve worked in Close Personal Protection, including with then prime minister John Howard for a few weeks, accompanying him on his morning walks.

“And when the Olympics were in Sydney I took care of Heads of State from Turkey and Bulgaria.

“It was great - I had a front row seat for everything. I was one of those people you see in the background wearing dark suits and looking serious.”

As we wind up what has been a two-hour conversation by the riverside in Kempsey, Gary tells me that in spite of being written off as a trouble-maker by many, he really is a loyal officer.

“I know I can polarise people because I fight for what I believe is right and I’ve never sold out,” he said.

“But I truly believe it is a privilege to be a policeman and to investigate crimes.

“We are public servants and we are there to serve the public. There are a lot of good hardworking police who are dedicated and go about their business efficiently and remain unrecognised. I feel privileged to work with them.”

And on a final lighter note ... he describes his ideal Sunday as being a day when he can simply do what he wants.

“I love buying the papers and having the time to read them, then a leisurely meal at an inner-city cafe ... maybe catch up with some friends or squeeze in a bit of training, hoping the phone doesn’t ring. I love living in the city, there is so much to see and do,” he said.

To read more stories like this, check out the latest edition of Mid North Coast Now online, here. 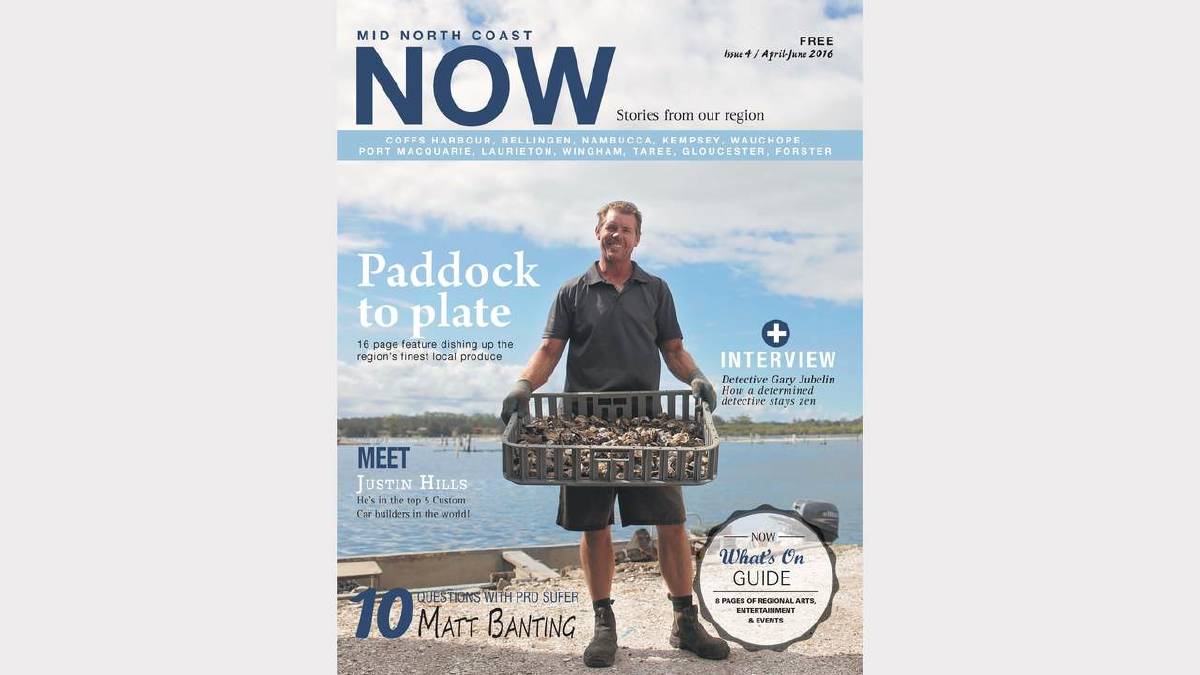 Discuss "Finding peace in a life full of crime"

Discuss "Finding peace in a life full of crime"