It’s a story that could have ended very differently.

Dan Miller, 44, was trapped in a dam under a three-tonne excavator at his Charlotte Bay property last Tuesday, February 7.

Dan was in the muddy, diesel-laden water for around five hours before a neighbour heard his screams for help. Dan and his wife Saimaa talk through the ordeal.

They had a pact. Dan Miller could not die. He just couldn’t. He’d made a promise to his wife Saimaa.

“Saimaa’s mother died when she was really young. When we got married we made a pact,” Dan said.

“It was humorous in that it was a horrible topic, but she made me promise I wouldn’t die first. When I hit the water that was the first thought in my mind.”

Around 11.30am the builder was landscaping on his property at Charlotte Bay.  As he drove on the dam the excavator slid.

“I just tried to adjust it, but with so much weight in the bucket it moved and the next thing I’m heading for the water,” Dan recalled.

“I hit the water and was still on the machine but trying to get off. I pushed off and was underwater and I felt the roll bar come down just below by shoulder blades. I was completely submerged and I thought ‘shit, this is heavy’.”

Face down, Dan slid up until the roll bar reached the small of his back in a position similar to a Cobra pose in yoga. He put his hands in the mud and tilted his head back to keep it clear from the water.

“That first, gasping breath is my clearest memory.” 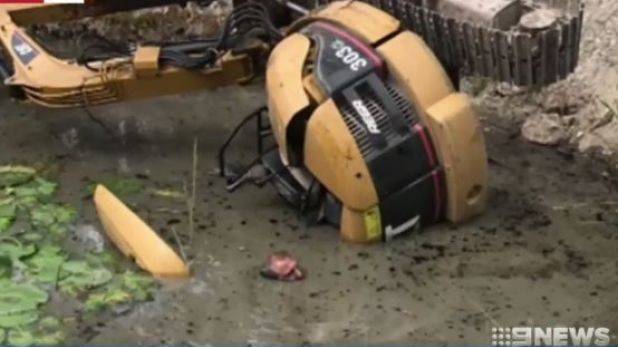 Within 10 minutes the excavator had turned off, it was silent apart from the machine ticking away.

“I thought there’s no-one coming for a long, long time. I stopped yelling almost straight away, it was pretty pointless, you’ve got to keep calm, there’s no point. I’ve done a lot of surfing, and when you’re in the water, no matter what happens you stay calm, you make good decisions. You panic you’re going to be swallowing water, diesel and hydraulic fluid you won’t last.”

Dan became methodical breaking down his actions in 60 second blocks by changing his arms slightly and rinsing his hands.

He said: “There was no benefit, it was just something to do.”

When Dan tried to dig himself out he sunk further into the murky water. Water got into his ears, only his nose was above the waterline.

“You’ve got make a plan on what’s going to happen if you die,” Dan said.  “I was going through scenarios of what it will be like for my family and how will they discover my body.”

“They would bring her home and see the excavator in the dam.

All you’d see is the excavator and instead of seeing my head you would just see my boots.

“That gave me strength I just thought you can’t do that to a four year old or my son and I thought of the promise I made to my wife.

“The consequences of me dying affects so many lives in such a horrific way, there’s just no way.” Now in the dam for around three hours Dan tried to pick the time of the day.

“At three my neighbour Mel would be home - I needed to give 10 minutes of energy. It was extreme and excruciating and I pushed my body up and didn’t worry about the pain in my back. I just yelled and yelled and yelled. I had to go down and suck in breaths through my nose and just keep yelling help, help, help.”

Dan said: “I thought this is it, I’ve just got to give one last burst and someone will know I'm here”.

“She was amazing, she just got on the phone and just bang, bang, bang. Then came more neighbours, then police, then the fire brigade – legends who saved me.” 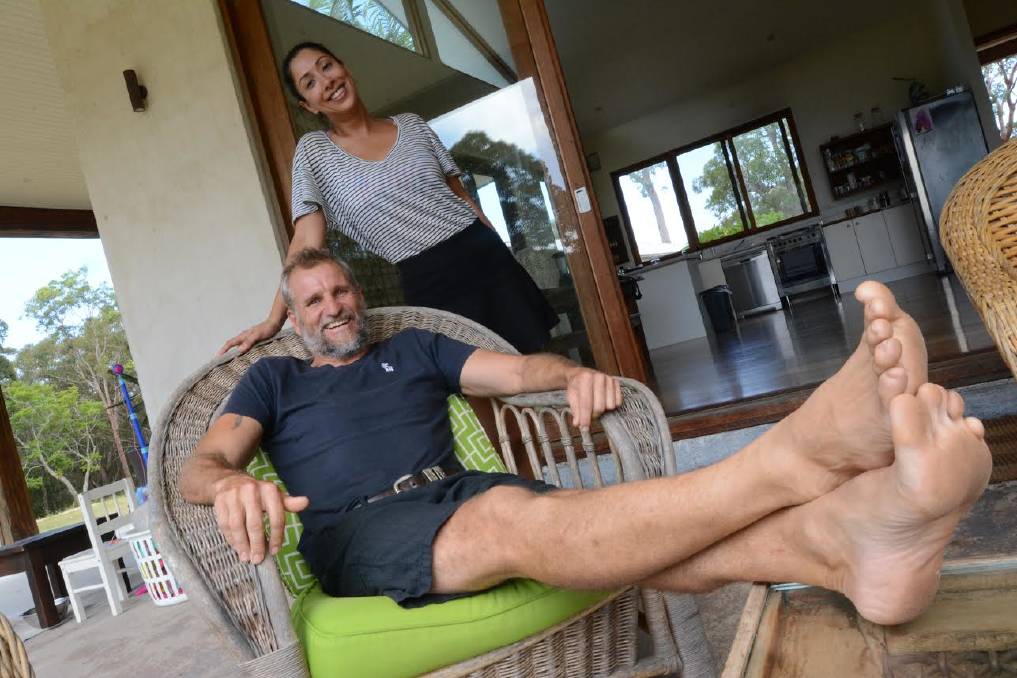 Dan Miller was flown to John Hunter Hospital and treated for hypothermia and water and chemicals in the lungs. A CT Scan revealed no, new spinal damage.

Many hands saved the life of Dan Miller, including those living in the Charlotte Bay community.

“The ticket to my freedom was in her right hand – her phone.”

Other neighbours came to help before Dan was lifted out of the dam by firefighters.

The group stabilised the excavator using timber blocks and dug beneath Dan’s body and dragged him out.

The excavator was later retrieved from the dam by neighbours, Paul Vidal, Tony and Zack Martin and John Henry.

“They got the excavator out, took it down the road and fixed it up,” Dan said.

“They said ‘Mate don’t worry about it’ and to me that’s just unreal. Community is through the roof here.”

Saimaa said their neighbours stepped in straight away to help with their children with Julie Henry taking them the first night and Barry Jones the next.

“The community support has been amazing,” Saimaa said.

“We had so many phone calls from people we don’t even know in the community just asking if there is anything they can do. We are so, so lucky where we live.”

When Saimaa Miller looked at her phone and saw two missed calls from her neighbours she knew something was wrong.

Saimaa finished work with a client at her spa in North Bondi, Sydney, and returned her neighbour Julie’s call. Saimaa said: “Julie said something has happened to Dan”.

“That was the scary part I had to ask those questions - is he alive? Is he breathing?”

“Funnily enough I had the exact same thought that he did, he couldn’t die, because he promised me. Then they said, “I can just see his head.”

Saimaa’s next 24 hours would become a mission of driving – driving to John Hunter Hospital, driving to Charlotte Bay to see their children nine-year-old Kalan and four-year-old Leilani and back again.

“What this has really changed for us going forward is my decision to sell my business in Sydney, to do more work here. I’ve been commuting for three years and I just need to be home.”