It's been a year since Australia introduced its policy of mandatory hotel quarantine for returning travellers. In the past year, some 211,000 travellers have been confined for two weeks in hotel rooms, in conditions many have found difficult to endure.

The policy remains one of the main reasons the Australian community has managed to escape the worst of the COVID-19 pandemic. For the most part, it has been accepted without question by the public.

This isn't to say it's been perfectly executed. The program has been the focus of much criticism and investigation over the past year - particularly in Victoria, where it has been twice suspended when the virus "leaked" into the community. The state's program is again about to begin accepting international arrivals, starting on April 8.

Experts continue to advocate for a stronger system, including moving quarantine hotels to regional locations and considering some form of home quarantine.

But the fundamental idea of quarantine - the mandatory removal of a person's liberties for the benefit of the whole community - remains uncontroversial.

You couldn’t make up this stuff. Player who whinged about hotel quarantine disproves her own point by testing positive to The Covid.

So, why is the feeling so different among Australians? We argue that one reason may be Australia's long history of incarceration of migrants, Indigenous people and anyone considered an "enemy" of the state. Since the early days of colonial settlement, different forms of confinement have been used not only to control the spread of illness, but also to respond to a wide range of perceived social and political problems.

These policies reinforced the imaginary idea of Australia as a clean, strong and healthy nation, a united federation in control of its borders.

As a result, Australians have become somewhat conditioned to accept the idea that liberty - at least the liberty of outsiders - should at times take second priority to the national interest.

Australia as a quarantine nation

Australia's history of quarantine began in the 1830s, when authorities in NSW first confined all international arrivals to their ships in harbour to prevent the spread of disease.

Soon afterwards, these arrivals were held for an "incubation period" of 14 days (and sometimes, longer) in a system of purpose-built quarantine stations. The program began only to wind down in the 1950s after air travel became popular.

As such, it was the longest-running quarantine program in the modern world, lasting nearly a century after England, France, and other parts of Europe abandoned the practice for overseas arrivals. 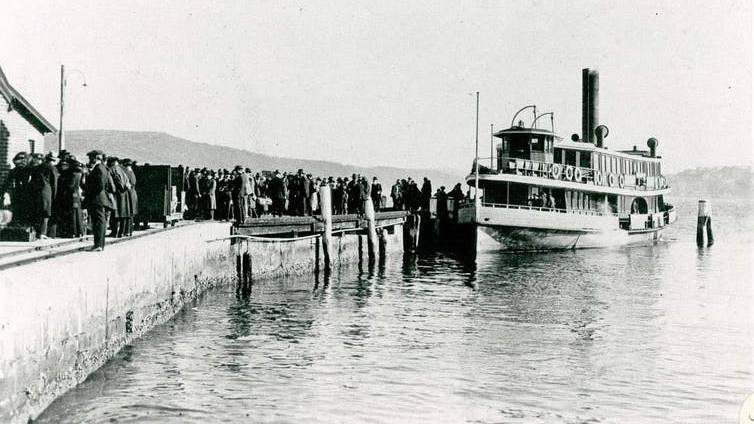 Passengers disembark from a Sydney ferry at a quarantine wharf in 1919. Wikimedia Commons

One explanation for the early enthusiasm for quarantine was it allowed the authorities to manage who could enter the colonies. The policy quickly took on a racialised tone and played into the anti-Chinese sentiment brewing in the goldfields.

Australia's quarantine system ramped up in the 1880s after an outbreak of smallpox in Sydney. While evidence suggests the disease arrived from Britain (where smallpox was endemic), authorities used the opportunity to raid the homes of Sydney's Chinese community and force them into quarantine. From that time, regardless of the evidence, Chinese people were regarded as the most potent vectors of disease.

According to historians, the Quarantine Act of 1908 is best understood as part of a suite of laws designed to control entry to Australia and entrench a racialised notion of "membership" in society.

Well into the 20th century, returning travellers had very different quarantine experiences, depending on their race and class.

White, first-class arrivals were serviced with good accommodation, food and entertainment, and many enjoyed their time in confinement. Lower-class and non-white passengers suffered poorer conditions, and could be detained far longer than the mandatory 14 days.

Confinement of Indigenous people and refugees

Quarantine was not the only form of confinement practised by colonial - and later, state and federal - governments.

A range of institutions were implemented to respond to perceived social and political problems, creating what we call an "institutional memory" - or template - for administrative confinement.

For each successive challenge over the years, Australian policymakers have reached for the same toolkit.

From the mid-1800s until well into the second half of the 20th century, for instance, governments established a network of protectorates, reserves and missions to confine and isolate First Nations people.

Their purpose shifted over time, from protecting Indigenous people from frontier violence to "smoothing the dying pillow" (placing First Nations people on reserves where it was believed the elderly would gradually die off and the younger generations would be assimilated into the larger population).

As part of this network, islands became particular sites of horror. Palm Island in Queensland, for example, became known as a place for extra-judicial punishment. Nearby Fantome Island was used for the compulsory isolation of Indigenous leprosy patients at a time when other countries had long abandoned this practice.

Australian policymakers drew on the same confinement toolkit during the two world wars. Australia's enemy alien internment camps were the most extensive of all allied nations. They were also used, uniquely, to detain prisoners of war on behalf of Australia's allies.

We would argue that Australian policymakers also relied on this institutional memory when devising a plan to respond to the arrival by boat of 26 Cambodian asylum seekers in 1989. The government fenced in an abandoned mining camp in Port Hedland, Western Australia, and detained the refugees there while their applications for protection were processed.

Australia's punitive and damaging immigration detention system was introduced soon after. Over the past three decades, refugees have been detained across the breath of the continent (including remote Christmas Island) and in Nauru, Papua New Guinea and Indonesia.

Hotels have recently been repurposed as "alternative places of detention" for some refugees and asylum seekers in Melbourne and Brisbane, as well.

Though many Australians have protested the mistreatment and lengthy detention of refugees in both onshore and offshore centres, the government has refused to bend to pressure to end the controversial program, despite the cost of over A$1 billion per year.

For now, quarantine hotels are also here to stay. While Australians have enjoyed the freedoms and safety from COVID-19 that they provide, we should remember these hotels are the latest in a long history of administrative confinement, many of which have been sites of pain and despair.

This article was first published on The Conversation. It is republished under Creative Commons licence.